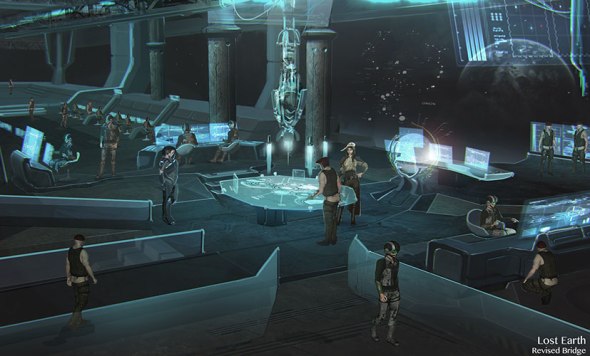 Today, I want to present to you a very special game I have been helping with since 2013. It was finished earlier this year. Sadly, you can’t really test it out, it’s a very special thing:

Lost Earth 2307 is a 4X space game AND a serious game, produced by Fraunhofer Institute for use in education by the German military (“Bundeswehr”). This time, I was involved in many areas: Music, sound design, voice recordings, editing & post-production, on-site audio integration using FMOD, text work, video editing and scripting them using ActionScript!

A BIG thanks to Daniel Atorf and the great team of scientist I had the pleasure to work with! Especially the on-site work was a fresh experience, to work with scientists is a pleasant thing! Thanks to Simon & Linked Dimensions!

“Coast Guard” has been released

Coast Guard (Reality Twist/Astragon ) is now out! It might look like “just a simulator”, but I think Reality Twist are really fighting here to open up the genre with a cool exciting story and adventure elements. It’s also very topical: It’s a game about refugees, and in another great move, 1 EUR per game sold goes to charity (Gaming Aid e.v.) towards helping refugees.

Ah yeah, Simon helmed the voice recordings and production, I helped a bit with post-production.

Happy Hills 2: Bombs Away! is out for iOS devices

Finally out! Happy Hills 2: Bombs Away! (Chimera Entertainment/dreamfab/Thumbstar Games), sequel to the very entertaining physics action puzzler Happy Hills, has hit the iOS app store. With new music, sounds and voices by the Knights of Soundtrack, featuring my friend Marco Rosenberg as the revamped hills.

I really like those games, not only from our audio angle (Happy Hills 1 for example is a project whose audio package I am still very.. ehm… happy with, one of my favourite achievements), but I also like this mix of action puzzling (things explode and are flying everywhere, you sometimes need to be quick) and the clever physics part (working with freezing, melting, friction, chain reactions in the right order to solve a level). It deserves to be a huge hit. 🙂

Smash’n’Bash is out for iOS devices!

New iOS app by Wynto / Headup Games! “Smash’n’Bash” has hit the App Store today, it’s a runner (and basher) with a Viking flair, personally reminds me a little of good old Golden Axe…

We provided sound effects, some viking voices and music in various layers for the game (from folky accordeon and tuba to full Viking rock). They took some of the music and used them for this trailer, too, check it out:

The game is planned to appear on PC, WindowsPhone8 and Android devices, too!

Hoppetee is out for iOS

Fast and colorful runner by Birgit Stock/Chimera Entertainment featuring a little grasshopper called Hoppetee, with our music (by Dominik), sounds (by me) and voices for the grasshopper (by my son) 🙂 Check it out…

Origamigore is now available on the app store. We provided sound effects and voices for this crazy Japanese game show style madness by the Skunk Brothers.. Check out the trailer below… 🙂 Big thanks to Rieke Werner and Zeis for their brilliant voice performances…

Once again I participated as a voice actor in a project by Eredalis. After 2 award-winning free campaigns for Starcraft  – Broodwar (with a big story, full synchronisation and additional music), I was again asked to voice a role in his (German) campaign for Warcraft III. The first part is up now.

Wimmelburg is released for Iphone / Ipad

Check out this beautiful children’s game for Iphone/Ipad! It’s a sort of Hidden Object Game meets fairy tale picture book, for 2-6 years old kids, parents and grandparents… It contains our music (wonderful bard song by our very own Dominik), a lot of cute sounds (dozens of mini-cutscenes) and voices (8 voice actors total).

Skylancer – Battle for Horizon Closed Beta has started! This fantasy browser game by Chimera Entertainment and ProSiebenSat.1 Digital comes with our sounds, voices and jingles… Flying ships, all kinds of cool creatures… Check it out:
http://skylancer.browsergames.de/

Right to the hard numbers. We were even busier than last year apparently, having composed 155 tracks with a combined length of 214 minutes for 34 games and 4 other projects. Insane. We provided 3092 sound effects for 19 games and 3 other projects. We have silently skated over the 100 projects line, but the 100th game will be celebrated in style, hopefully this year…

The year started with the release of Dungeons, one of the bigger games we have worked on so far, that went on to hit #1 charts position in Germany and #6 in the UK, how awesome is that? It came with a cool soundtrack CD, we love that.

Then followed the releases of A Knights Dawn and Demolition Dash for iOS devices, the latter of which later received the Best Handheld Game award at the German Developer Awards (Entwicklerpreis). The betas of Bigpoint’s Ramacity (thanks for that big chance guys) and Ravenburger’s Memory® World Tour started.

After a rather calm summer, my article in Making Games magazine was released right on time for my favourite Gamescom so far… I had so many good chats there, so many chances, some of them wild and surprising… This year’s Gamescom will hopefully be as much fun…

I held my first lecture at SAE/Quantm Institute, making it the 3rd school I gave a lecture at. The 4th will follow this year!

The rest of the year saw the releases of Happy Hills, Triple Trouble, Dungeons – The Dark Lord , Rettungswagen Simulator and Sengoku (by the Swedish publisher Paradox). A totally new kind of job was the sound design for the music video by the band Nachtmahr.

We were also asked to help our friends at Games Academy with audio for the games Gargoyles, Nocturne and Call of Carlos. Anytime guys!

Very happy we are for the cooperation with our friends at Dynamedion, who were so kind to take us on board for a few projects which are mostly unannounced – yet!

And lastly, greetings to the games we worked on in 2011 that are still unannounced (many they are), to those we are working on (hello Asylum, The Dark Eye: Chains of Satinav and Forge of Empires) and to those that will come out in 2012 (we have some big surprises in store), and to those sad few ones whose future is a bit dark at the moment…

A BIG THANK YOU to our friends, clients & contacts for the great games you create, for allowing us to help making them, and for your general existence 🙂 Wish you all a great year and who knows – maybe we’ll work together on a project in 2012?

Daniel, with best wishes of Dominik, Heike and Simon

Triple Trouble by Polynauten has hit the app store, for which we made parts of the sounds, voices and jingles. It’s a cute Match-3 game for Iphone and Ipad… Check it out…

Also a friendly nod to the other games we helped with, which were nominated and didn’t quite win: Ramacity (Best Social Game)  & Dungeons (Best Game).

Happy Hills is out for Iphone and Ipad

Happy Hills is a wild action-physics-puzzler, with our dynamic music, sound effects  – and voices by my son and me 😀 Grab the game for free, or check out this trailer:

Demolition Dash for free and #1

Hi guys, Demolition Dash is currently #1 on the App Store among the free apps in a few countries, and as it’s a game we did all audio for, and I am a little proud of the results, I can recommend it again to you, it’s for free until Sunday!

It looks awesome, and has among other things music in 10 different styles! Not bad for iOS me thinks, ey?

Open Beta for Bigpoint’s Ramacity has started. Check out the game, our music, and the first sounds and voices here: http://www.ramacity.de/

Just one day later, another game we are involved with has hit the App Store. Demolition Dash by Chimera & Dreamfab. It’s a sidescrolling, all destroying beauty with a lot of very diverse music by us. Notice the show theme styled music turn into 8 very different versions as you travel all over the world, Paris, London, Moscow, San Francisco, New York, Rio, Tokyo and Sidney. This game holds no less than 10 different musical styles! And all live instruments I can play, and we did all the voices too, so I am very proud of what we pulled off here. Please check it out, and support the fresh talented guys involved:

A Knights Dawn, a fantasy Tower Defense game for Iphone and Ipad developed by our friends at VisionaryX, is now available on the App Store. It contains a range of fantasy songs, sounds and even some voice acting by your Knights of Soundtrack. It currently costs 0.79€ or $0.99.

Here is a trailer for the game:

We are working on Dungeons (Realmforge/ Kalypso)

We are happy to announce that we are working on Dungeons, developed by Realmforge (Ceville…) and published by Kalypso (Patrizier IV…).

The game is a fantasy strategy game which pleasantly reminds me of Dungeon Keeper. It’s evil, fantasy, loud, and dark – and so are we! Check out this trailer for which we provided all audio except the Kalypso logo: music, sfx and voices. I had the honor to voice all characters myself 🙂

I was asked to lend my voice to the main character of the CGI film “The Lord Inquisitor” (working title). The project is quite ambitious, and knowing the previous work of director and lead artist Erasmus Brosdau (see artwork below), it will probably look quite awesome when it’s done in about 2 years.  The animated short movie, which is set in the Warhammer 40k universe and will last about 15 minutes, will be shown at film festivals.

We used the calm days around Xmas to finish the audio for a few smaller game projects:

Now we will concentrate on the remaining projects and of course good ol’ A New Beginning, which had a friendly preview in the latest Gamestar magazine.